What To Do About Rising Gas Prices

You have no doubt seen gas prices on the rise in recent weeks and months. What solutions do you have for bringing down gas prices?

You do realize that rising gas prices make consumer goods rise in price too, right? While gas is getting closer to $4 per gallon, will you like it when it gets to $8 per gallon? All the transportation costs of consumer products will increase.

>King: Election winner will be out of power for a generation

>In my obsession with the British elections next week, the headline really jumped out at me.

“I saw the Governor of the Bank of England last week when I was in London and he told me whoever wins this election will be out of power for a whole generation because of how tough the fiscal austerity will have to be.”

However, leaving this inconsistencies aside, the comments do seem plausible: King has said repeatedly that the Government will need to impose far more ambitious cuts on the deficit than it currently plans. The comments ought to stand as a reminder that although the focus of the election has switched away to bigotgate, and the economic focus worldwide to the eurozone malaise, Britain faces a decade of hurt in the wake of its decade of debt.

The Republican party faces the same danger in both 2010 and 2012. With Obama still in office and until he is out of office, there are going to be continual fractures to our system. Our side needs to be ready and be upfront about our solutions and our plans. I’ve written about 1992, 1994 and 1996 before. I will continue to say that we must be bold and we must be realistic. We must have a conversation with the American people.

The damage that Obama is inflicting, including the sense of entitlements, is not going to go away easily. Hard decisions are going to have to be made. If we start having the conversations now, we will not only prepare people for the realities of tough decisions and real life in what is America, but we will start to get people to understand, to work with us and to advocate on our behalf within their circles of influence.

As Ronald Reagan said in 1975: “Our people look for a cause to believe in. Is it a third party we need, or is it a new and revitalized second party, raising a banner of no pastels, but bold colors, which make it unmistakably clear where we stand on all of the issues troubling the people?”

Let’s start presenting our bold colors now. As I mentioned here before, Congressman Paul Ryan’s Roadmap For America’s Future is a great place to start. I love the British and I love watching Question Time. But, I don’t want to be like our friends from across the pond in 2013 when a Republican President is sworn in to office.

>I read this blog post “Dick Cheney is a great American hero” in the UK Telegraph today and the corresponding comments to go along with it. I admit I was pulled in by the title as I met Vice President Cheney in 2004 and while my time with him was ever so brief, a photo op, I have admired Dick Cheney from the beginning of what I would call “the modern Dick Cheney”.

I was too young to know the Dick Cheney of the Gerald Ford years. Based on what I read in Craig Shirley’s Reagan’s Revolution, where Cheney worked for Ford and was actively against the great conservative icon of our time, Ronald Reagan. But, just as Ronald Reagan had been a democrat, Dick Cheney eventually found the right side to be on.

When Governor George W. Bush chose Dick Cheney to be the choice for Vice President in 2000, I didn’t know enough about Dick Cheney to know what I thought about him or his selection. I instinctively trusted George W. Bush. Half way through Cheney’s remarks thanking Governor Bush, I made an unprecedented move and donated to the new Bush-Cheney campaign via the internet.

Then there was the RNC speech in Philadelphia. Dick Cheney had my attention after that speech for sure. This was a speech by the way, that I consider one of the top 10 speeches in my political life (that might make for a good blog post later). The media at the time chose the word “gravitas” when describing Cheney. He was a presence indeed. His speech in Philadelphia was serious, solemn and stirring. You may recall the great line about Clinton when Cheney said, “and now, as the man from Hope, goes home to uh, New York”.

But more vivid in my mind was the part of the speech where Cheney said the following:

When you make that trip from Andrews to the Pentagon, and you look down on the city of Washington, one of the first things you see is the Capitol, where all the great debates that have shaped 200 years of American history have taken place. You fly down along the Mall and see the monument to George Washington, a structure as grand as the man himself. To the north is the White House, where John Adams once prayed “that none but honest and wise men may ever rule under this roof.” Next you see the memorial to Thomas Jefferson, the third president and the author of our Declaration of Independence. And then you fly over the memorial to Abraham Lincoln, this greatest of presidents, the man who saved the union. Then you cross the Potomac, on approach to the Pentagon. But just before you settle down on the landing pad, you look upon Arlington National Cemetery its gentle slopes and crosses row on row.

I never once made that trip without being reminded how enormously fortunate we all are to be Americans, and what a terrible price thousands have paid so that all of us and millions more around the world might live in freedom.

And while I don’t intend for this to be a living tribute to Dick Cheney, there were plenty of great speeches from Vice President Cheney after the RNC speech in 2000. Then there was May of this year when the Real Vice President gave a speech at the American Enterprise Institute educating “acting” President Obama and America on matters of national security. Vice President Cheney, 4 months out of office, certainly knows more about national security than Herr Obama and Herr Biden will know combined in their 4 years as filling time at the White House.

The leftist media loved to portray Vice President Cheney as heartless and ruthless and always with a snarl on his face. They of course, all having graduated from America’s journalism schools where they attended wanting to “change the world” rather than “report events that actually took place”, prefer to have a guy with a nice smile. Herr Biden would fall into this category, but Biden is also someone who is an incompetent, bumbling idiot (witness his “we have to spend more to get out of debt” comment this past week). 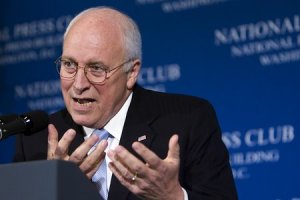 The former Vice President is hated by the media. He forgot more information yesterday than they learned in their 4 years in journalism school. They had (and still have) no understanding of a brilliant mind and of a great American who understood the history of America and it’s role in the world.

I suspect, to the fools doing the reporting in this country, had Vice President Cheney looked like this more often, he would have received a little more respect, and he might have been a little less easy to label.

Thank you Vice President Cheney for your eight years of service to our nation, and to four more during the down times of Herr Obama.

The Cap and Trade Tax that passed is the House on Friday night is a good example of why I am a believer in Green Conservatism, a concept termed by Speaker Newt Gingrich in 2007.

My even more basic premise than Newt’s (found here with a complete explanation of Green Conservatism) is that these bills advance in the House, to the Senate, because the Left is the only side speaking in the debate. I don’t believe in Global Warming, the science is faulty and let’s be honest, who can really measure such a thing? When you have a horrible plan, brought forth by the Left, and you have Lefty A and Lefty B debating its passage and talking to the American people about its merits, there is nothing the Right can do except stand off to the side and yell “No”. Game over, we lose.

So, I’ve been hearing now, for over two years, since Speaker Gingrich first introduced Green Conservatism, that Newt is a sellout, that he’s been co-opted by the Left and that he’s not really a conservative. This is all garbage.

Have you read about Green Conservatism? Does it sound like repackaged left-wing propaganda? If you answered yes, I would disagree with you and encourage you to look again. And if you think it is, then I would further encourage you to create alternatives to the Leftist propaganda and let’s have the debate shift from Lefty A and Lefty B to Left vs. Right. If we don’t do this as a movement, we will see more and more Cap and Trade Tax bills, and we’ll think that the version that passed Friday was pretty moderate.

Two great conservative, movement leaders from that last century thought this was an important issue to America:

“There is an absolute necessity of waging all-out war against the debauching of the environment.” – Governor Ronald Reagan, First Earth Day, 1970